So the breast reduction saga continues...


At the three week appointment, they gave me the okay to sleep at night without a bra on. I'm doing research, and so much of it points to bras making breasts sag and droop due to impeding and damaging chest, back, and shoulder issues. They also gave me permission to sleep on my side again and to stretch and I am sleeping so much better! The promised my breasts would start to fill out from underneath more. They took out my "deep" stitches, too, which pinched a little. I have lost most of my scabs except the sites where my suture ends and stitches were sticking out. Most of them have dissolved, though. I love picking at scabs for no good reason. It has been torture not to! I can also take ibuprofen again.

It's been a challenge for me. I honestly thought at about 10 days post-op that I was disfigured and might need breast implants to look "normal" again. My breasts hadn't started to fill out underneath yet. It's starting, and I'm noticing it, but it's going slowly. They don't quite look like I hoped they would right off the bat, but I'm trying not to beat myself up. It takes time to heal. A lot of it and patience is not a virtue I am particularly good at. The Breast Reduction support group in Facebook has been very, very helpful for me as well.

I am loving being able to stretch again. My muscles were getting so stiff and sore in my back and shoulders. They're allowing me to do light exercise like walking and lift up to thirty pounds now, so I can do more household chores. All I can think about is how much upper body muscle mass I will have lost between now and when I'm fully healed. It's still weird to see myself and get used to my world without my formerly uncomfortable/large breasts getting in my way (or catching my dropped food, but whatever).

So, I've been doing alright so far, but this week threw me for a loop. I got sick on Monday (booooo!) and started losing my voice. Most people wouldn't get so upset about it, but I work in telephone customer care (one self-published book doesn't quite pay the bills). It's messed with my voice and my work, which is quite frustrating. I think the megadose of antibiotics I got at surgery protected me from bacteria infections for a while, but, 'Tis the Season! So many of my friends have gotten the flu and bad colds, and I haven't. I got my flu shot in October though, so even I do get the flu, it won't be so bad, or at worst, deadly. We have a vaccine for a reason, and it's especially important to take advantage of it if you are not immunocompromised. Please don't pelt me with anti-vax comments, I have no patience for it. I have managed to get through my work week so far, fingers crossed that Mucinex DM keeps doing the trick, too.

I got back into cross-stitch, and I'm making so much progress on my current one! I can't believe how much fun I'm having with it. I needed a break from crochet for a few minutes, anyway. The one I'm currently making is from a kit, Lavender and Lace series, Celtic Christmas by Marilyn Leavitt-Imblum. I fell in love with it the first time I saw it! I started on it back in 2017, but had to put it down several times for various reasons (mostly school-related). I'm finally getting into it! It should look like this when I'm finished: 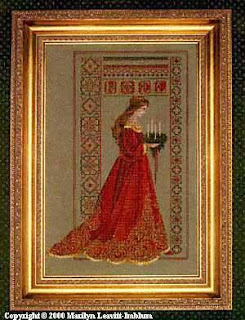 There's also another four I have the patterns for, which I've already purchased identical Aida fabrics for all of them, which are the other four seasons. Cross-stitch is so rewarding for me, I haven't been doing it very much since I started the path to grad school, but it really is rewarding and satisfying. I wish I could afford to get my works professionally framed, though. I have two cross-stitches on an end table in my living room that don't quite fit the frames themselves are going to need some adjustment.

I hope you all finding ways to entertain yourselves in January! I usually find January the most boring and depressing month because it's cold, there's no big holidays (save for Dr. Martin Luther King Jr. Day, which some nasty people don't feel like celebrating, boo on them!) and we're all in a money crunch from Christmas. February gets better, though, with Valentine's Day, African American History Month and the Super Bowl (I am tickled pink that the Patriots didn't get it)!

What are you looking forward to in February?
Posted by Eleni at 6:55 PM