Oh, this is the place where I'm supposed to talk about myself. I'm good at that! 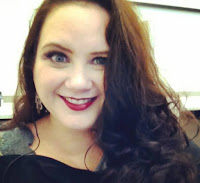 My name's Eleni McKnight and I'm a Murfreesboro, Tennessee native (as in, I'm so local to Murfreesboro, everybody points new residents to me when they need directions). I graduated from the University of Tennessee in Knoxville with a degree in Theatre with an emphasis in Literature and a wild passion for creating clothes and doing make-up. I've always been an avid reader and I love music and theatre, even though I've only been paid for dinner theatre, but not for performing music. I started writing at age eight when I had read all the Baby-Sitter's Club books that were out and wanted something new to read. It's never quite left me over the years

These days, you can usually find me reading a book, crocheting, cross-stitching, at a concert, drinking a craft beer with friends, or taking a dance class. In July of 2021, I finished my Master's in Marriage and Family Counseling/Therapy at Trevecca Nazarene Univerisity in Nashville and I couldn't be prouder of myself. My day job is now working in Drug Rebahiliation, which is where you can find me.