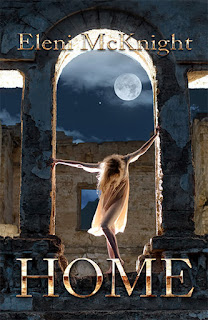 Knowledge is a dangerous commodity in the Home commune, the last beacon of civilization against the fallen outside world. As Suzannah Commons begins to secretly read forbidden books, she jeopardizes her future for the forbidden love of the boy who supplies her new, dangerous habit, Silas Maars, and his family. Will her new-found knowledge be her destruction?

Suzannah is in training with the rest of the unmarried teenage girls in the Handmaiden House and Home’s laundry to become a bride when she accidentally comes upon a naked boy in one of the family quarters, Silas Maars. To see a naked man before marriage is an unforgivable sin in Home and a challenge to her precious status as a virgin, her only aspect of worth. This compromise to her purity would earn her an automatic exile in the Hard Labor Camp, a death sentence until the commune leader, Parson, sentences her to the punishment of serving Silas and his unusual family as a housekeeper. As she works for the Maars family and is isolated from the rest of the commune’s population, she discovers the frightening, threatening outside world is not as dangerous as she has been led to believe. The Maars family reveals to her that Deacon controls the population of Home by keeping them all ignorant, denying them education and books so he can teach his own twisted, corrupt, self-serving version of religion from the pulpit. As she learns the truth and begins to fall into a star-crossed love with Silas, her fate as a childbride to one of the lecherous Elders or a worker in the hard labor camp is drawing nigh.